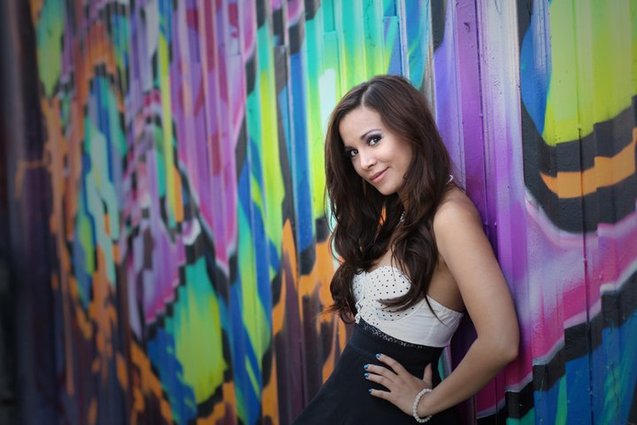 In her twitter bio Emily Grace describes herself as “A West Coast girl with an East Coast heart and a British accent.” That is exactly how I would describe Emily, adding how she is an amazing person with a huge heart.  Emily is from London, England, where she grew up studying music and musical theatre.  She was in a handful of different theatrical productions in 2006 and 2007. In addition to theatre, Emily can also sing and play the piano/keys. Emily was a member of Ballas Hough Band, formerly Almost Amy, with Mark Ballas, Derek Hough, Sam Marder, and Harry Sullivan.  All 5 were friends and knew each other from England and decided to relocate to Los Angeles to pursue their dreams of making music. After a small tour in late 2008/early 2009, the band members have since all started work on separate projects. Emily went on to be a backup singer for Demi Lovato on her 2009 tour as well as the Demi Lovato/Jonas Brothers 2010 World Tour.  Emily currently still has an EP in the works, so stay tuned for more information on that.  As someone who has been following Emily’s career since the Almost Amy days, I can say that she is extremely talented and a joy to watch perform. I have also met Emily on a handful of occasions and she is one of the sweetest people you will ever meet. It has been a pleasure to know her.  I knew when we started Team True Beauty that Emily would be a great asset to have.  We could not be more honored or blessed to have her support and her answers to our spotlight questions showcase what a truly beautiful person she is.

TTB: Why did you decide to join Team True Beauty?
EMILY: I decided to join Team True Beauty because I understand the struggle that so many people, young and old, go through on a daily basis when they look in the mirror. Everybody has insecurities. Over the past 10 years I had to work very hard to overcome mine (and that doesn't mean they don't creep up every now and then!) and I wanted to use what I have learnt to help others on their journey

TTB: What is one piece of advice you would give to people who are struggling to see THEIR true beauty?
EMILY: When you're in a good mood, sit down with a pen and paper. Ignore what everybody else has ever told you and look deep, deep down inside of you. Write down all the things that you know are beautiful about you, on the inside and on the outside, no negativity allowed! Then stick that piece of paper up on the wall next to your bed and read it every morning.

TTB: How do YOU describe Beauty? True Beauty? Is there a difference?
EMILY: Beauty isn't skin deep. Beauty is a smile that makes others feel warm inside. Don't strive to be "pretty". Learn that you're beautiful.

TTB: What is one thing that your fans/followers/TTB supporters would be surprised to find out about you?
EMILY: Hmmm...I have a white ink tattoo on my left wrist that says "Love Life". I had it done right before the first show of the Demi Lovato 09 tour, because I was in such a good place and I wanted to remind myself to feel that way every day, no matter what. Also, I'm verminophobic.

TTB: If there is ONE thing that you can leave this spotlight with concerning ANYTHING (funny or serious) what would it be?
EMILY: We all need to take a leaf out of this little girl's book :)  http://www.youtube.com/watch?v=qR3rK0kZFkg